The 31st GRC took place online over Zoom on Wednesday, January 20, 2021. The event offered a day full of knowledge sharing, and a unique opportunity for undergraduate students to experience the world of research in engineering and science conducted in the EEE Department at Bilkent University.

This year’s schedule included 103 oral presentations grouped into 18 sessions, with three sessions taking place concurrently during each of the 6-time blocks. In the presentations, the graduate and selected undergraduate students shared their novel research projects and answered questions from the audience. Various areas of electrical and electronics engineering, including artificial intelligence and machine learning, signal processing, communications and networking, biomedical engineering, electronics, electromagnetics, control and robotics, optics and photonics, and nanotechnology, were covered. More than 340 participants, including Bilkent EEE graduate and undergraduate students, attended the conference.

The conference concluded with a presentation given by Prof. Tolga Mete Duman for prospective graduate students who want to study in the EEE Department at Bilkent University. The presentation was followed by the award ceremony, at which 5 best presentation awards were given out by the department. The conference was chaired by Prof. Sinan Gezici. The graduate students Merve Begüm Terzi and Ahmet Safa Öztürk, along with the undergraduate students from the IEEE Bilkent Student Branch, took part in organizing the event. More information about the GRC can be found at https://ieee.bilkent.edu.tr/grc2021/index.html.

Below are several examples of new research results presented at the conference. 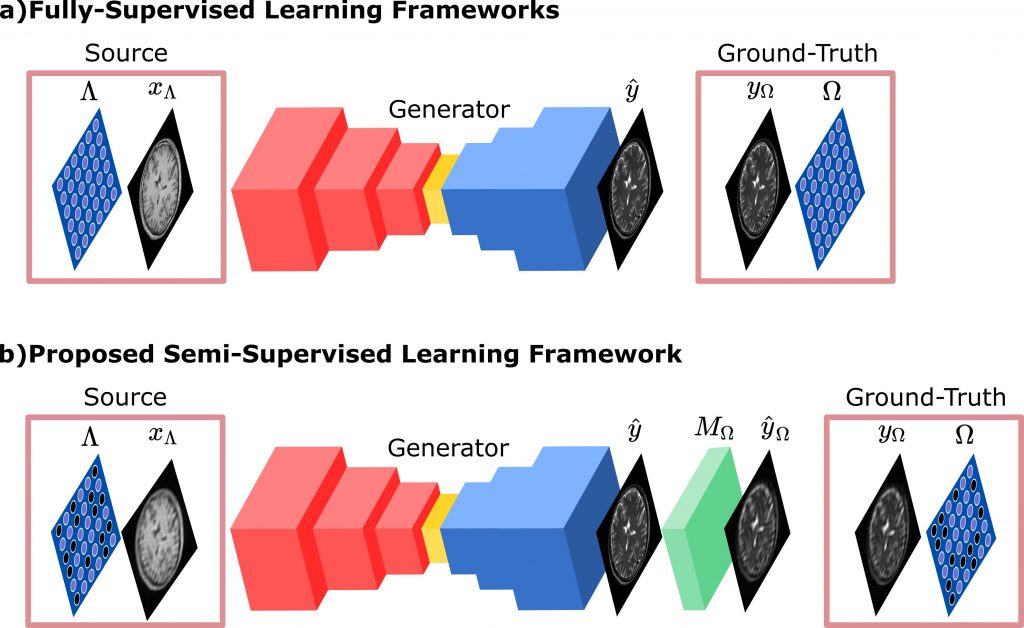 Magnetic resonance imaging (MRI) attains a focal position in clinical neuroimaging due to its capacity to image anatomy with varying tissue contrasts, in turn, accumulating diagnostic knowledge. Yet long exam sessions come across as a limitation to collect a complete set of tissue contrasts. To alleviate this limitation, previous studies have trained deep neural network models in supervised learning frameworks to synthesize missing (target) contrast images from available (source) contrast images. However, the requirement of large, paired datasets of high-dimensional MRI datasets poses an intrinsic limitation to their utility. To this end, a novel weakly-supervised learning model (wsGAN) for accelerated multi-contrast MRI is introduced. The proposed model enables training with only undersampled acquisitions using a selective loss function, allowing network training with substantially smaller datasets and holding great promise for clinical use. 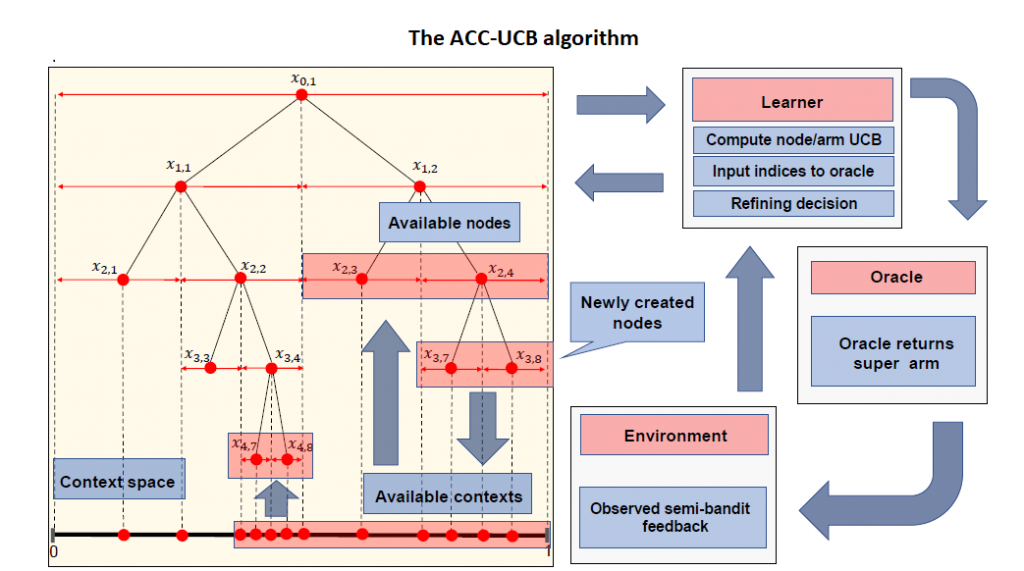 A contextual combinatorial volatile multi-armed bandit (CCV-MAB), in which at each round, the learner observes a set of available base arms and their contexts, and then, selects a super arm that contains base arms in order to maximize its cumulative reward, is considered. Under the semi-bandit feedback setting and assuming that the contexts lie in a space endowed with the Euclidean norm and that the expected base arm outcomes (expected rewards) are Lipschitz-continuous in the contexts (expected base arm outcomes), an algorithm called Adaptive Contextual Combinatorial Upper Confidence Bound (ACC-UCB) is proposed. In addition, a recipe for obtaining more optimistic regret bounds by taking into account the volatility of the base arms is provided, and it is shown that ACC-UCB achieves significant performance gains compared to the state-of-the-art for worker selection in mobile crowdsourcing.

Recently, thermal therapy applications such as Magnetic Field Hyperthermia gain popularity for cancer treatment procedures. These studies aim to eliminate cancerous regions by applying heat, but there are serious deficiencies to measure the temperature increase in these regions. In this work, non‑invasive temperature mapping capability of Magnetic Particle Imaging was shown with a novel technique called TAURUS. By means of this, the effectiveness of the hyperthermia therapy can be increased with these temperature maps, which will contain important information about the course and efficiency of the treatment.

With the aid of artificial intelligence, the burden on the shoulders of law experts can be alleviated. In this study, the first steps towards the use of machine learning in Turkish law are taken, and it is demonstrated that decisions of Turkish higher courts can be predicted with good accuracy using natural language processing techniques. For this purpose, the first-ever collection of labeled Turkish legal texts is created, and the performance of various state-of-the-art algorithms is measured. The achieved results have both technical and legal implications.

A general communication problem that has applications in various fields is investigated from a game-theoretic perspective. An encoder wishes to convey an observed random parameter (source) with a known distribution to a decoder. In contrast with the classical source coding setup, the encoder and decoder have misaligned objective functions due to a bias term appearing at the objective function of the encoder. The focus is on the quadratic cheap talk problem where the encoder and decoder communicate through a noiseless environment and the encoder does not have a power constraint. The existence and uniqueness of Nash equilibria with any number of bins considering sources with a density whose support is unbounded are proven. Connections with the classical theory of optimal quantization and convergence results of Lloyd’s method are also made by proving convergence to Nash equilibrium under best response dynamics.