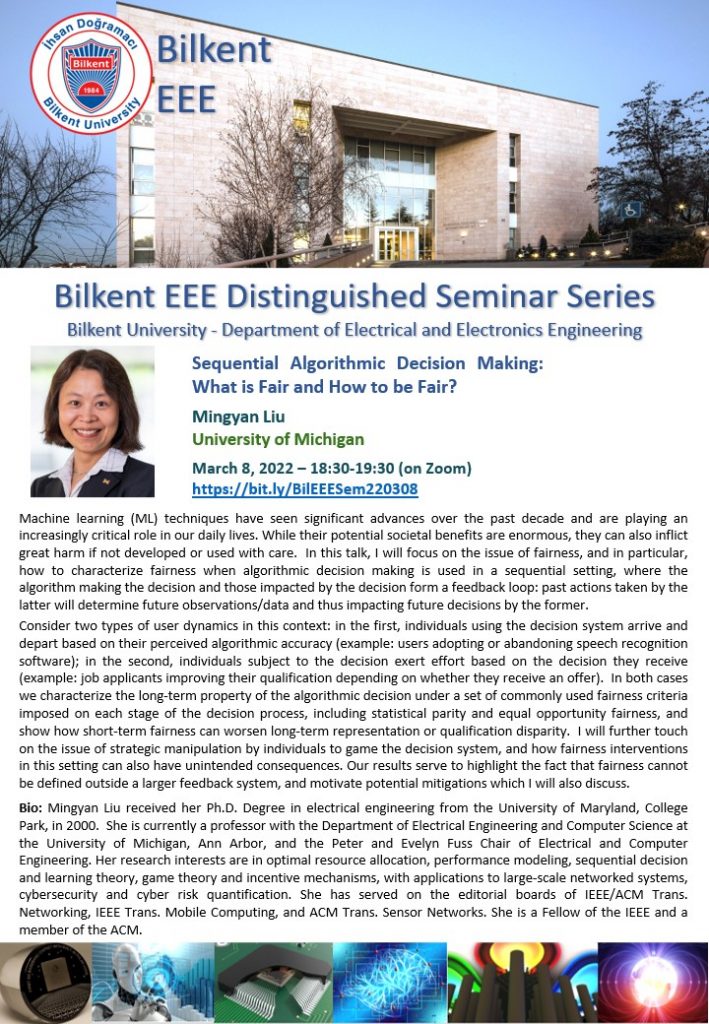 Sequential Algorithmic Decision Making: What is Fair and How to be Fair?​

Machine learning (ML) techniques have seen significant advances over the past decade and are playing an increasingly critical role in our daily lives. While their potential societal benefits are enormous, they can also inflict great harm if not developed or used with care.  In this talk, I will focus on the issue of fairness, and in particular, how to characterize fairness when algorithmic decision making is used in a sequential setting, where the algorithm making the decision and those impacted by the decision form a feedback loop: past actions taken by the latter will determine future observations/data and thus impacting future decisions by the former.                                            ​

Consider two types of user dynamics in this context: in the first, individuals using the decision system arrive and depart based on their perceived algorithmic accuracy (example: users adopting or abandoning speech recognition software); in the second, individuals subject to the decision exert effort based on the decision they receive (example: job applicants improving their qualification depending on whether they receive an offer).  In both cases we characterize the long-term property of the algorithmic decision under a set of commonly used fairness criteria imposed on each stage of the decision process, including statistical parity and equal opportunity fairness, and show how short-term fairness can worsen long-term representation or qualification disparity.  I will further touch on the issue of strategic manipulation by individuals to game the decision system, and how fairness interventions in this setting can also have unintended consequences. Our results serve to highlight the fact that fairness cannot be defined outside a larger feedback system, and motivate potential mitigations which I will also discuss.  ​

Bio: Mingyan Liu received her Ph.D. Degree in electrical engineering from the University of Maryland, College Park, in 2000.  She is currently a professor with the Department of Electrical Engineering and Computer Science at the University of Michigan, Ann Arbor, and the Peter and Evelyn Fuss Chair of Electrical and Computer Engineering. Her research interests are in optimal resource allocation, performance modeling, sequential decision and learning theory, game theory and incentive mechanisms, with applications to large-scale networked systems, cybersecurity and cyber risk quantification. She has served on the editorial boards of IEEE/ACM Trans. Networking, IEEE Trans. Mobile Computing, and ACM Trans. Sensor Networks. She is a Fellow of the IEEE and a member of the ACM.