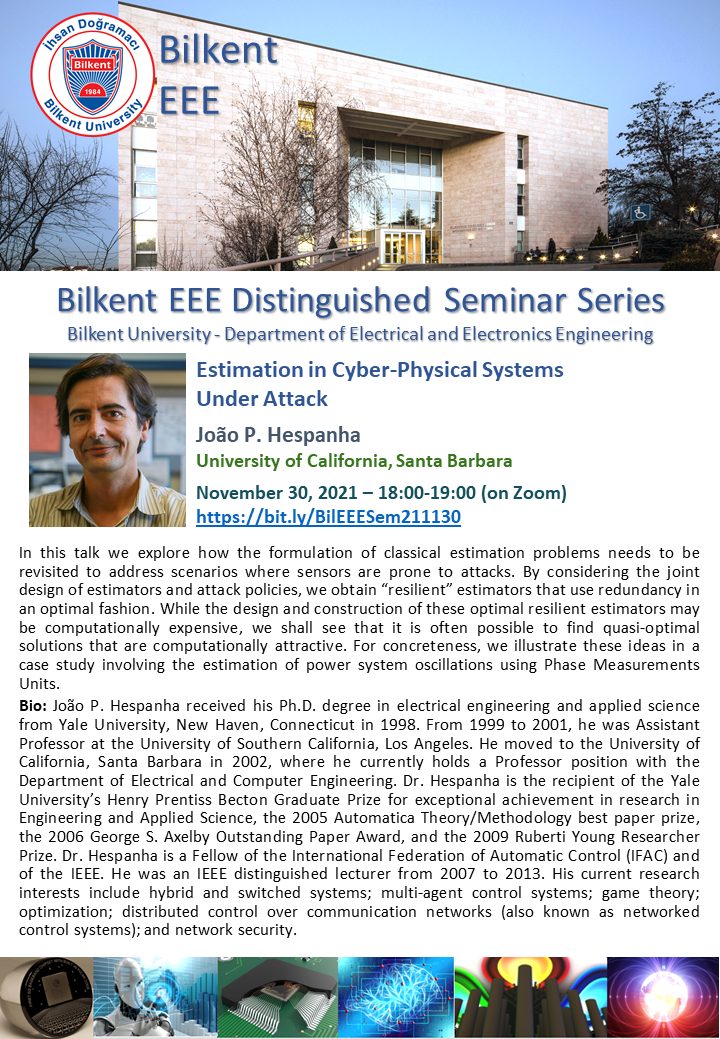 Estimation in Cyber-Physical Systems Under Attack

In this talk, we explore how the formulation of classical estimation problems needs to be revisited to address scenarios where sensors are prone to attacks. By considering the joint design of estimators and attack policies, we obtain “resilient” estimators that use redundancy in an optimal fashion. While the design and construction of these optimal resilient estimators may be computationally expensive, we shall see that it is often possible to find quasi-optimal solutions that are computationally attractive. For concreteness, we illustrate these ideas in a case study involving the estimation of power system oscillations using Phase Measurements Units.

Bio: João P. Hespanha received his Ph.D. degree in electrical engineering and applied science from Yale University, New Haven, Connecticut in 1998. From 1999 to 2001, he was Assistant Professor at the University of Southern California, Los Angeles. He moved to the University of California, Santa Barbara in 2002, where he currently holds a Professor position with the Department of Electrical and Computer Engineering. Dr. Hespanha is the recipient of the Yale University’s Henry Prentiss Becton Graduate Prize for exceptional achievement in research in Engineering and Applied Science, the 2005 Automatica Theory/Methodology best paper prize, the 2006 George S. Axelby Outstanding Paper Award, and the 2009 Ruberti Young Researcher Prize. Dr. Hespanha is a Fellow of the International Federation of Automatic Control (IFAC) and of the IEEE. He was an IEEE distinguished lecturer from 2007 to 2013. His current research interests include hybrid and switched systems; multi-agent control systems; game theory; optimization; distributed control over communication networks (also known as networked control systems); and network security.